How to make worm casting tea in 4 easy steps 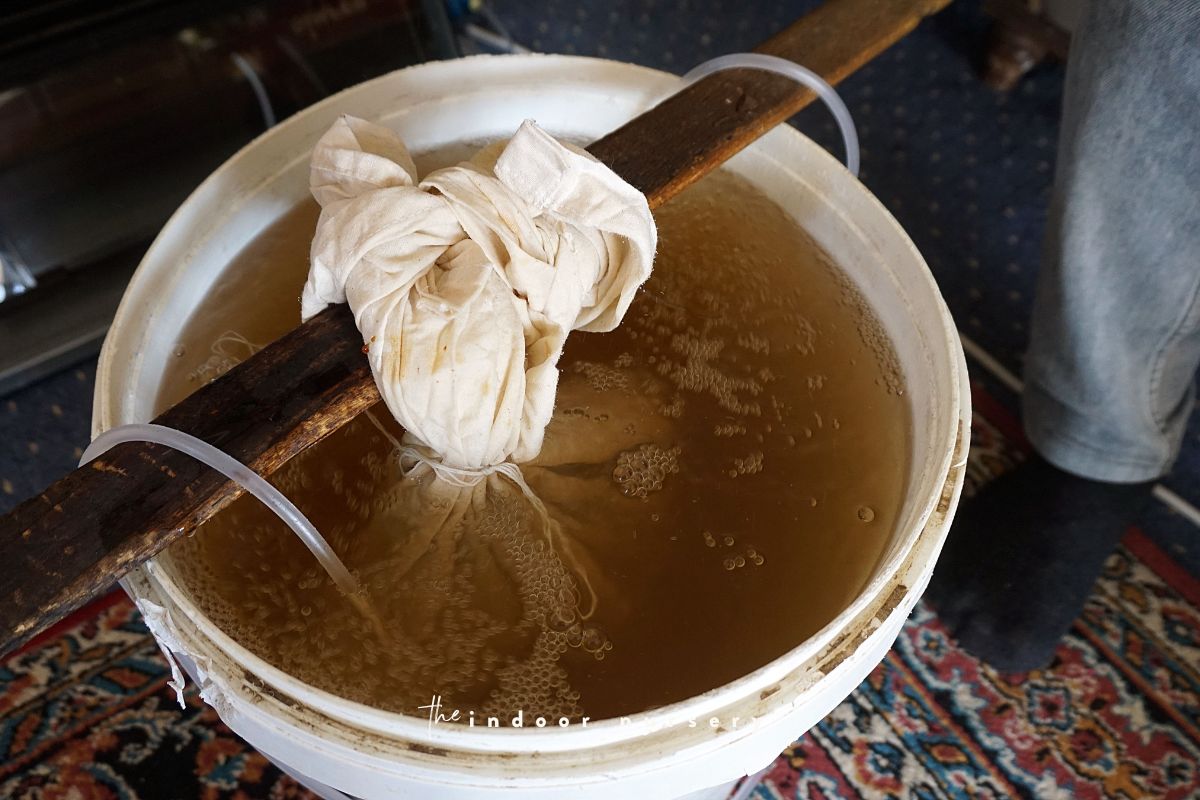 There are many wonderful benefits to using worm castings as a soil amendment, and it’s hard to imagine how you can improve upon the pure, natural material.

It can be taken further, however, by making a worm casting tea: rich in microbial life, worm castings that have been mixed with water and brewed overnight provide all of the nutritional benefits of worm castings, with an added layer of microbiotic activity that results in a potent, yet gentle, fertilizer.

The result of using worm tea in your care schedule is healthy plant growth and an increased ability to fight off plant diseases.

What is worm tea?

Worm castings tea, or vermicompost tea, is a mixture of worm castings (worm manure), water, and a carbohydrate source (like molasses) that has been brewed over 24 hours. The result is a nutritious fertilizer teeming with beneficial microorganisms. Over that day of brewing, oxygen must be incorporated by stirring every few hours or by using an air pump. The oxygen is necessary because the bacteria and microbial life in the tea are aerobic (like the good bacteria in compost) and need oxygen to live and be able to digest the worm castings in the mixture. Without the oxygen, those bacteria can’t survive, and anaerobic bacteria that can live without oxygen will take over.

Anaerobic microbes, unlike aerobic ones, smell pretty bad! A healthy worm casting tea, like worm castings themselves, won’t have much of an odor beyond an earthy scent. For this same reason, it’s important to use worm tea right away after it’s prepared: the nutrients and oxygen will only support the aerobic microbes until those resources are used up. Anaerobic bacteria will then have their turn, and the brew will be without nutrients and start to spoil.

Brewed worm tea can last for a couple of months when stored in a shaded, cool area. After it goes bad, however, unhealthy bacteria like E.coli and salmonella may proliferate, which we don’t want near our gardens or food!

Worm castings offer many benefits like dense nutrient content, pH neutrality, and a slow-release solid form of fertilizer. Worm tea shares some of these attributes, while offering unique benefits as a brewed liquid fertilizer.

How to make worm casting tea

Worm castings tea is easy to make, only requiring a few ingredients and a little time! This recipe is for 5 gallons of worm tea, but it can be halved or divided further as needed to make the right amount for your number of plants.

Mix the worm castings and molasses into the water and stir until it’s consistent. Filtered water should be used because some tap water has chlorine to treat it for bacteria, while well water may be salt-heavy, a nutrient that should definitely be kept away from gardening soil. If your water is chlorinated, allow it to sit for 24 hours for the chlorine to evaporate before using it in your mixture.

For a carbohydrate source to energize the microbes, unsulfured molasses is best because white sugar and corn syrup are overly refined and don’t support the bacteria the way that the organic matter present in molasses does. An unsulfured product is important because sulfur can kill the microbial life that makes the tea what it is. The high nutrient content of molasses (including copper, potassium, and iron) contributes to the nutritiousness of the worm casting brew.

NOTE: Many people like to put their worm castings in a cheesecloth and hang that cheesecloth from a stick that rests atop the bucket. This quite literally makes a tea out of the worm castings and you are “steeping” the tea.

Store the worm tea in a cool, shaded area. Ultraviolet (UV) rays from sunlight can kill the bacteria and microbes in the mixture.

Stir the mixture every 4 or 5 hours over 24 hours. This incorporates the oxygen that’s necessary for the microbes to live and process the worm tea. If you choose to use a cheesecloth, give the “tea bag” a gentle stirring in the water. This will allow you to keep the worm castings in the cheesecloth while aerating the mixture.

Once the tea is finished, you can apply it directly to your plants like you would water. You can also dilute the mixture by adding water to spread it out among many plants, or to give lower concentrations to plants that like a little less fertilizer at a time. Since most, but not all, of the solids will dissolve or be broken down, the mixture can be filtered through a coffee or paint filter and used in a watering can so it won’t clog the spout, or in a spray bottle for a foliar application.

Sometimes the term worm casting tea is used for the liquid runoff from a worm bin. This liquid is actually called leachate, and it’s different from worm tea. Leachate is a mixture of liquids from the castings and compost materials, including several kinds of acids as well as undigested liquids from decomposing organic matter (which may be toxic to your plants if undiluted).

There is a divide in the gardening community on whether leachate should be used on plants, but it’s generally agreed that if the compost is made from organic materials and the leachate is diluted with water (1 part leachate to 10 parts water) and brewed for 24 hours (following a similar process to making worm tea), it can be a safe way to provide your plants with nutrients.

Worm tea might seem like a delicate process, but when you do it right, your plants will love it! We’ve gathered some of the most common questions here on how to best manage your worm tea usage.

Do you need to dilute worm casting tea?

Worm tea doesn’t need to be diluted, but it can be! If you want to spread out your batch of worm tea over many plants, or give more frequent, less potent servings of worm tea to plants that appreciate the regular supply of nutrients, you can add up to 5 parts water to 1 part worm tea without over-diluting the mixture.

How long does worm tea take to work?

Worm tea is prized as a fertilizer because the nutrients it contains are available immediately. During the brewing process, bacteria and microbes break down worm castings even further, while the water absorbs nutrients and also helps break down the castings. The nutrient-rich liquid is then easily absorbed and used by your plants to grow happily and stay in good health.

Is worm tea enough as a fertilizer?

Worm tea, as nutritious as it is, isn’t quite enough to fully provide for your plants. Since worm castings and worm tea are pH neutral, it may create an uncomfortable growing environment after a while for many plants that like their soil to be lower or higher than a pH of 7. Always monitor your potting soil when adding fertilizer to be sure each particular plant’s preferred balance isn’t thrown off.

How often should you use worm tea?

Worm tea is a gentle way to provide your plants with nutrients regularly, and it can be used every week or two on your regular watering schedule (but be sure it isn’t unbalancing your soil’s pH).

How long will worm tea last?

Worm tea may last up to three months when stored in a cool, dark place, but it’s advised to use it up as quickly as you can to be sure the microbial life is present and active. The longer tea sits, the more nutrients and oxygen in the mixture will be used up, and the microbial population will diminish with the nutritional value.