growing peperomia watermelon: how to grow them and keep them happy 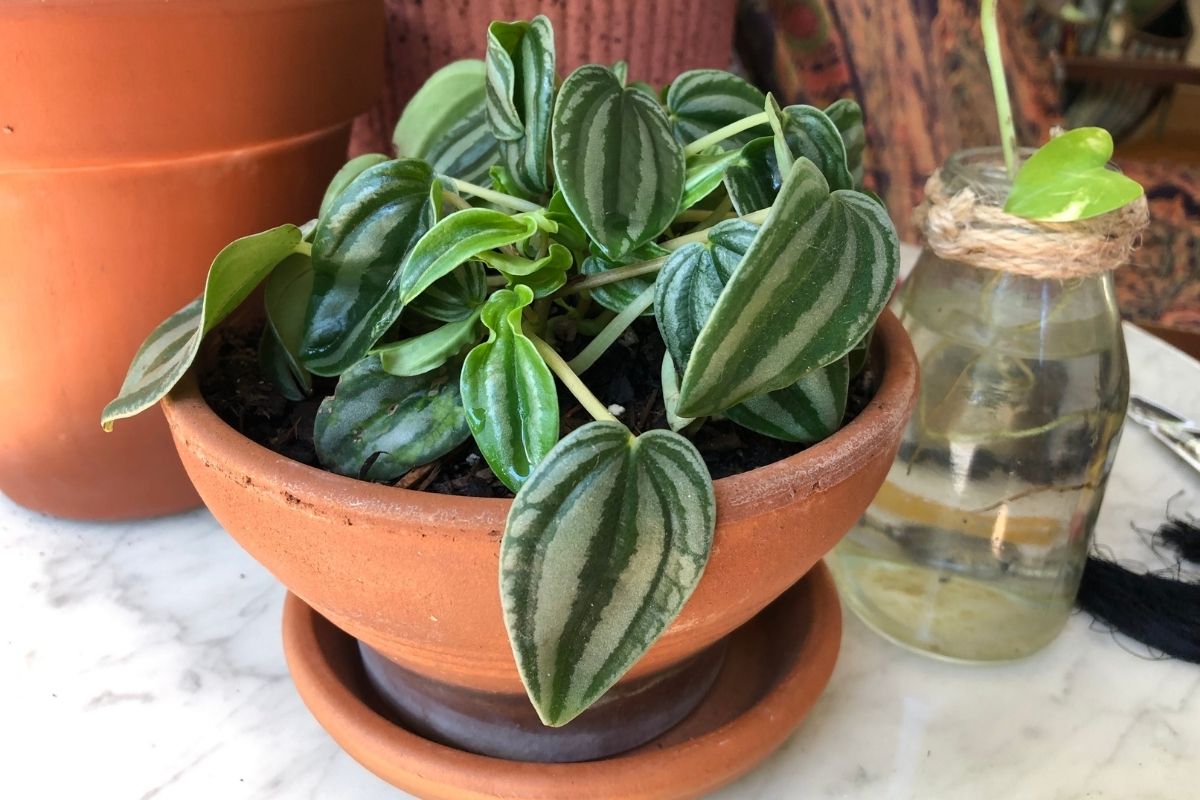 Part succulent, part pepper(well…kind of), and fully plant, watermelon peperomia is a delightful companion for any pot or planter in your home. Named for its green and white-to-silver stripes, Peperomia argyreia is a popular tabletop plant with distinctive round and variegated leaves – like the fruit it’s named after. Soo… is it a pepper? Not really. The name of the Peperomia (Greek for “resembling pepper”) genus refers to the plant group’s leaves, which are similar to the leaves of their cousin pepper plants! Peperomia and pepper plants are cousins in the Piperaceae family. How can a plant be “part-succulent’? The watermelon peperomia is known as a “semi-succulent” because its leaves are firm and fleshy, but relatively thin compared to a true succulent; and you’ll find its care needs are similar to that of a succulent.

Peperomia argyreia is native to the tropical forests of northern South America, where it generally grows at the base of trees, on rocks, and on fallen trunks. This environment encouraged the evolution of this particular peperomia’s compact, fibrous root system, as well as the development of aerial roots along its stems that allow the plant to absorb moisture and nutrients from the water vapor in the air and the surfaces on which the plant grows. Although a Peperomia argyreia may be temperamental when it comes to watering (not too much, but not too infrequently), its efficient use of nutrients makes it easy to care for in terms of soil and fertilizer requirements. Note that while this variety of peperomia isn’t uncommon as a houseplant, it might not be available in your local nursery.

Main thing guys: don’t – I repeat, DO NOT – overwater this plant. Although it looks like a pilea with attitude, it’s not. Remember that the watermelon Peperomia is a semi-succulent and requires less water than your average houseplant. That being said, watermelon Peperomia is otherwise easy-to-care-for and will produce a unique, bushy look with regular maintenance. Once you’re familiar with your peperomia’s hydration and fertilizer needs, you can set it aside in bright, indirect light and it’ll be happy as a clam.

As a rainforest floor-native, Peperomia argyreia is used to a good dose of indirect sunlight. The dark green leaves of the plant show that it stores a lot of chlorophyll to tolerate the somewhat shady conditions, a result of active photosynthesis of all the light it can get. Since the plant puts out many stems with a single leaf on each, you will notice it reaching towards a light source if it’s in need. In a bright room with enough light, the plant will grow lots of stems and full leaves. The plant can’t get too much light – as long as it’s indirect.

Water needs: water once or twice a week

Due to this plant’s miraculous ability to absorb moisture from the air through its aerial roots, it doesn’t need much direct watering. Paired with the watermelon Peperomia’s shallow root system, which can easily be damaged by overwatering, this adaption is the #1 reason why so many poor little peperomia plants end up as expensive potted compost in homes (i.e. they die 🥺). It is possible to save an overwatered peperomia if you catch your mistake soon enough, but these plants do develop root rot quickly – so best bet? Get it right the first time.

The leaves of this plant store a surprising amount of water, and it’s accustomed to inconsistent water in its natural habitat. Peperomia doesn’t require a lot of water regularly, but the roots shouldn’t be allowed to dry out completely or the plant will get dehydrated. Water it once or twice a week, and over time, you’ll figure out the needs of your individual watermelon Peperomia.

The Peperomia argyreia appreciates a semi-humid environment in nature, between 40 and 50%. Too much humidity, however, can encourage mold or fungus growth on their leaf surfaces or on the soil. Keep them out of rooms that get humid or wet, but an occasional spray with a water bottle won’t harm them. Our homes are usually between 30 and 50% humidity, so the watermelon Peperomia will be comfortable if you are. Put them in areas away from drafty windows in the winter, as the dry air can damage the tender leaves and stems.

As a tropical plant, Watermelon Peperomia likes temperatures that hover around 70 degrees Fahrenheit. As with the humidity level, our homes are comfortable places for Peperomia argyreia. Keep the plant away from drafty windows in the winter, and out of direct sunlight all year. The plant’s leaves can get damaged and dehydrated by the heat of UV rays from direct sun.

Watermelon Peperomia are efficient with their nutrients since, in nature, they generally grow in low-soil conditions despite being in the forest. Growing on rotting tree trucks, rocks, and other non-soil surfaces, Peperomia plants in general make a little go a long way when it comes to the nutrients they’re able to absorb from decaying plant matter and rainwater. For your indoor watermelon Peperomia, fertilizing once, maybe twice, a month should be enough to keep your plant happy.

The low-soil conditions the Watermelon Peperomia plant is used to doesn’t mean it won’t like growing in your pot. Mixing in coarse materials like sand, perlite, or orchid bark will help keep the soil well-drained, while allowing the organic material to hold some moisture in. You can also add dry Sphagnum moss or Leca to both encourage soil drainage and hold on to moisture.

Watermelon Peperomia are great candidates to plant in Leca, porous clay pebbles that retain moisture for a constant source of hydration, but are inorganic and expose the roots to more air than soil. Since Peperomia argyreia naturally grow in low- to no-soil conditions, they will thrive in a pot of Leca.

Repotting a Watermelon Peperomia plant as it outgrows smaller containers is easy to do. Just make sure the destination is filled with the right type of soil and that it has a drainage hole so water doesn’t sit in the soil. Then you can move the plant (roots, soil, and all) to the new pot and fill in any empty spaces with new soil.

You can propagate a Peperomia argyreia with leaf cuttings. There are a couple of ways to do this. You can either cut the stem and leaf to grow a new root from that, or you can cut and plant only the leaf. When you choose to plant only the leaf-cutting, cut the stem off completely and plant the leaf halfway in soil, with the cut edge down. You can plant a full leaf or cut it in half. The root node will grow new roots from the cut, and after a few weeks, it will sprout new shoots.

When you propagate a watermelon Peperomia plant, you can plant many of them in the same pot, and they won’t crowd each other out. You can put several cuttings about a half an inch apart to grow a dense pot of shoots.

Watermelon Peperomia doesn’t need to be pruned unless a leaf or stem is wilting from damage or age. When you propagate a new plant with leaf cuttings, the stem won’t grow a new leaf, so be sure not to take too many off at a time, or you’ll have to wait for new shoots to fill in the space.

These plants are susceptible to all of the normal house plant pests. If you have any problems, try a neem oil or gentle dish soap solution to clear the plant of insects. If necessary, change the soil to be sure to rid the pot of them. Watermelon Peperomia can also develop root rot easily since its shallow roots don’t like to sit in very moist material. For the same reason, these plants can be easily damaged by fungal growth in over-saturated soil.

Why is my Watermelon Peperomia plant yellowing?

If your normally green Peperomia is fading to a light green or yellow, it usually means the plant is lacking oxygen, either from overwatering, or not enough water. Scale back if you’ve been watering frequently, and try light waterings a little more frequently if your plant is dehydrated. Discoloration may also be a result of too low light. Too much shade will prevent the plant from making chlorophyll, the source of the usually deep green color in Watermelon Peperomia leaves.

Why are my Watermelon Peperomia’s stems so long?

Too little light will also result in leggy growth: long stems with smaller leaves. The stems will extend to try to reach for more light, and they will produce thinner bodies and smaller leaves to conserve energy. If you have long, thin Peperomia stems, move the plant into brighter indirect sunlight.