10 indoor peperomia varieties that will impress your friends 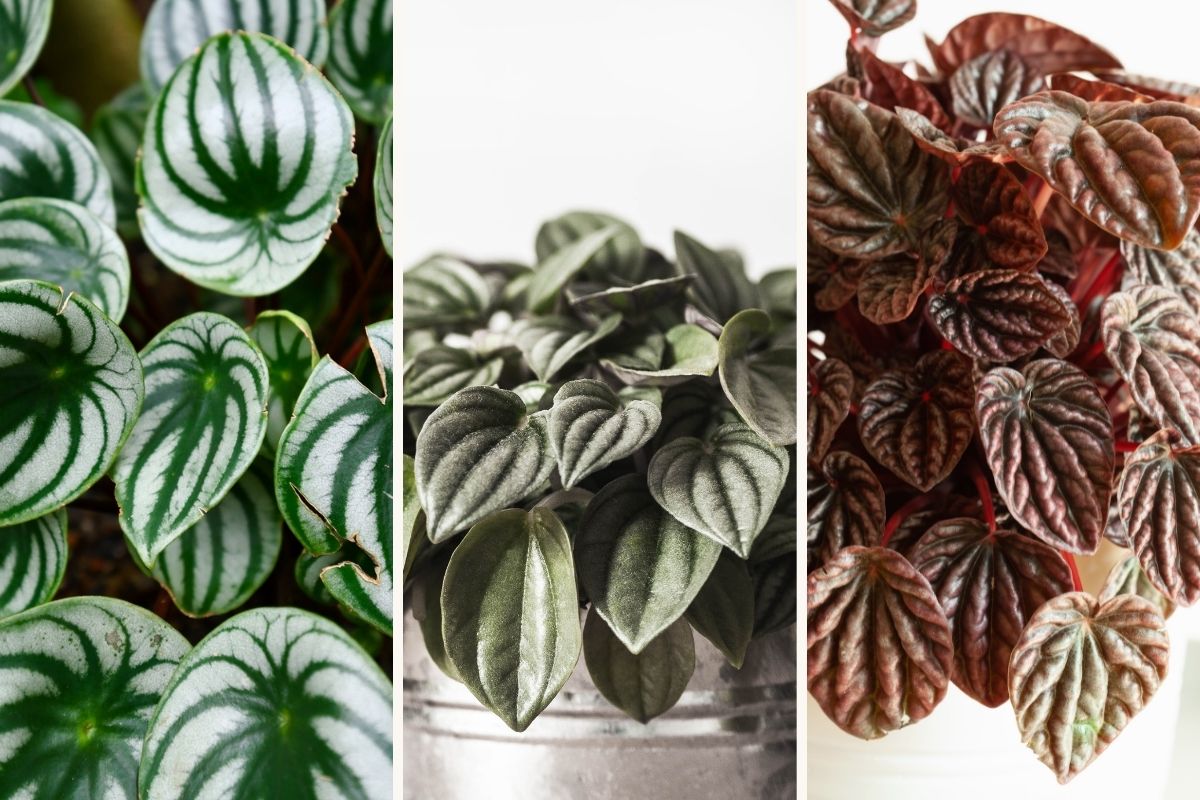 Peperomia plants have long been a popular houseplant choice thanks to their drought-tolerant leaves, beautiful ornamental foliage, and relatively low commitment. They are also on the ASPCA’s list of non-toxic plants, meaning they are great pet-friendly houseplants to add to your home or office.

There are over 1,500 peperomia varieties native to the Caribbean, Mexico, Africa, and South America. Also called a radiator plant, they are rare in the wild and are most commonly found in greenhouses and as houseplants. Most peperomia prefer well-drained soil, bright, indirect light, and infrequent watering. Rescuing an overwatered peperomia is possible, but it’s important to act fast if you give them a bit too much love with the watering can.

In general, peperomias are compact plants with smooth, succulent-like leaves. Some types are trailing. Others are large and busy. Some of these peperomia types look so different from one another it can be a challenge to identify them as members of the same family. There are hundreds of colors, variegations, leaf shapes, and flowers.

To help you identify the best indoor peperomia varieties that will turn your indoor space into a lush, beautifully cared-for jungle, here are some of the most popular peperomias.

A post shared by Plants and Luke Mommy (@luke_n_planty_corner)

The Metallic peperomia, or Peperomia Rosso, is a small, compact plant with leaves that grow in a rosette formation. They will reach a uniform height and width of about 8 inches, meaning they don’t take up much space and will fit nicely on a desk or shelf.

What makes this peperomia species so unique is its ornamental foliage. The leaves have dark red undersides with silver-colored veins that give the plant its metallic sheen. They will flower, producing red, spiky flowers that appear in the summertime.

This indoor variety is easy to care for. It needs well-draining potting soil to thrive. They prefer morning or evening sunlight but can burn or discolor easily in bright, direct sunlight. In addition, they should be kept away from drafty windows or vents as they do not tolerate extreme temperature fluctuations.

This type of peperomia is commonly referred to as String of Turtles thanks to the tiny leaves’ appearance and pattern of its leaves. It is a trailing plant that,, when left to its own devices can grow in thick mats or cascade elegantly down the sides of its pot. Generally, it grows between 1 to 4 inches tall.

The leaves on the String of Turtles are small, fleshy, and round. They range in color from dark purple to green with white veins. When the plant blooms, it produces small, cream-colored flowers that have no scent.

They grow best in warm temperatures, humid conditions, indirect light, and well-drained soil. Often, these indoor peperomias are susceptible to overwatering, which can result in wilted or discolored leaves, so it’s important to keep the soil moist without drowning the roots and use a pot with a drainage hole.

The Red Ripple Peperomia, or Peperomia caperata, is a sturdy variety of peperomia that is extremely resistant to pests and disease. It grows to be about 8 inches tall and, like many other varieties of peperomias, is a succulent-like plant that is drought tolerant and thrives in warm, humid areas and bright, indirect light. It doesn’t do well in temperatures lower than 50 degrees Fahrenheit.

The Red Ripple has stunning foliage that makes it a beautiful ornamental houseplant. It has waxy, heart-shaped leaves with deep crinkles that come in a burgundy and silver hue. When it flowers, small, scentless flowers grow on tall, red stalks.

Peperomia rotundifolia, more commonly known as Trailing Jade or round leaf Peperomia, is a peperomia variety that looks different from other peperomias with its thick, round leaves and long, soft stems. The trailing vines are frequently found in cracks and crevices in tree trunks, logs, and rocks.

Like other varieties of peperomia, Trailing Jade likes shady sunlight and a humid environment. They do not like the cold and prefer underwatering to overwatering.

Also known as the American Baby Rubber Plant, Peperomia obtusifolia grows in a bushy formation. It has thin upright stems with elliptic, bright green foliage that grows up to 6 inches long. These leaves store water and can have yellow or white variegations. The entire plant can grow to be 12 inches tall.

The Baby Rubber Plant is resistant to most common household plant diseases and pests. However, mealybugs and aphids can be a problem. Root rot or scab-like bumps on the leaves from overwatering can also be an issue.

Named for its resemblance to the striped rind of a watermelon, Watermelon peperomia is a 6-inch tall houseplant that grows in a bush-like appearance.

The slightly oval, dark, and light green striped leaves are attached by a soft, central stem that has a reddish color to it. In the right light, the stripes have a silvery sheen to them as well. The rounded leaves are significantly larger than other peperomia varieties and can be easily propagated with leaf cuttings.

Medium to bright light will help the Watermelon Peperomia thrive, but direct light can cause the leaves to burn. Fluorescent light found indoors will also provide this houseplant with the amount of light it needs.

Humidity usually isn’t a problem for this plant. If the air is too dry, it can experience crispy brown edges along with its leaves.

The stunning color combinations of the Peperomia Jelly is one of the reasons it is such a sought-after houseplant. It is also called the Ginny peperomia. The leaves have elongated ovals with a slight wave along the edge. They come in a bright variegation mix of pink, red, cream, and mid-to-dark green.

Although it produces white flowers every spring, which appear on spikes, the flowers aren’t near as attractive as the foliage and don’t have any scent.

Water is stored in the thick, waxy leaves, helping to keep it drought-resistant. When the plant is thirsty, the leaves will wrinkle and shrivel. The root system of this type of peperomia is rather weak compared to other types of indoor houseplants, which can lead to root rot and fungal diseases if overwatered.

Although the Peperomia Jelly won’t get much taller than 6 inches, its elegant vines can reach up to 10 feet long. This makes them a great addition to hanging baskets.

One of the most stunning varieties of peperomia is the Rosso or Peperomia caperata. This house plant produces deep, dark green leaves that come to a sharp point and have deep grooves and bright red undersides. The leaves are waxy and shiny, and it has long, narrow flowers with a yellow color.

The plant is relatively small, reaching maximum heights and widths of 10 inches. Their love for high humidity and small size makes them an attractive addition to terrariums with fluorescent lights, although it won’t do much in hanging baskets.

The Parallel Peperomia is one of those peperomia varieties known for its ability to spread out over the rainforest ground with trailing vines and small, striped leaves. The leaves have an elongated shape that comes to a sharp point and features green and white stripes. The leaves grow from a tall, red-colored woody stem.

The blooms on this plant with glossy, fleshy leaves are nothing to write home about when compared with the bright, brilliant foliage.

Overall, caring for this house plant is great for beginners looking to get their feet wet in the houseplant trend. It does well in shallow, well-drained pots with a soil mixture that is 2:1 peat and perlite. It also likes indirect bright light.

Normal humidity of a house or terrarium is typically enough to help the Parallel Peperomia thrive, but it can be helped along during the hot summer months by misting occasionally. They would look nice in a hanging basket.

Peperomia Hope is a combination of popular peperomia plant  like the Peperomia deppeana and the Peperomia quadrifolia. It has a similar look to Trailing Jade with its round, light green leaves that have a succulent-like appearance that has woody, trailing stems. It also has long multi-colored stripes.

It thrives at a temperature of 64 degrees Fahrenheit with filtered sunlight, similar to its natural growing conditions on the rainforest floor. It also prefers well-drained soil with peat moss that gets the roots plenty of oxygen and aeration.

Bright sun is not a prerequisite for growing the Peperomia Hope. It prefers shady spots like low-light kitchens or balconies that get eastern light.

There are plenty of other peperomia plant varieties, including:

Thanks to the recent houseplant trend, peperomias, or radiator plants as they are lovingly known, have become a beloved member of the houseplant club. From their easy care to their lovely, shiny green leaves, variegated leaves, red stems, and white or greenish spikes, the different types of peperomia are a beautiful addition to any home.