topped plant vs non topped: a guide to topping cannabis 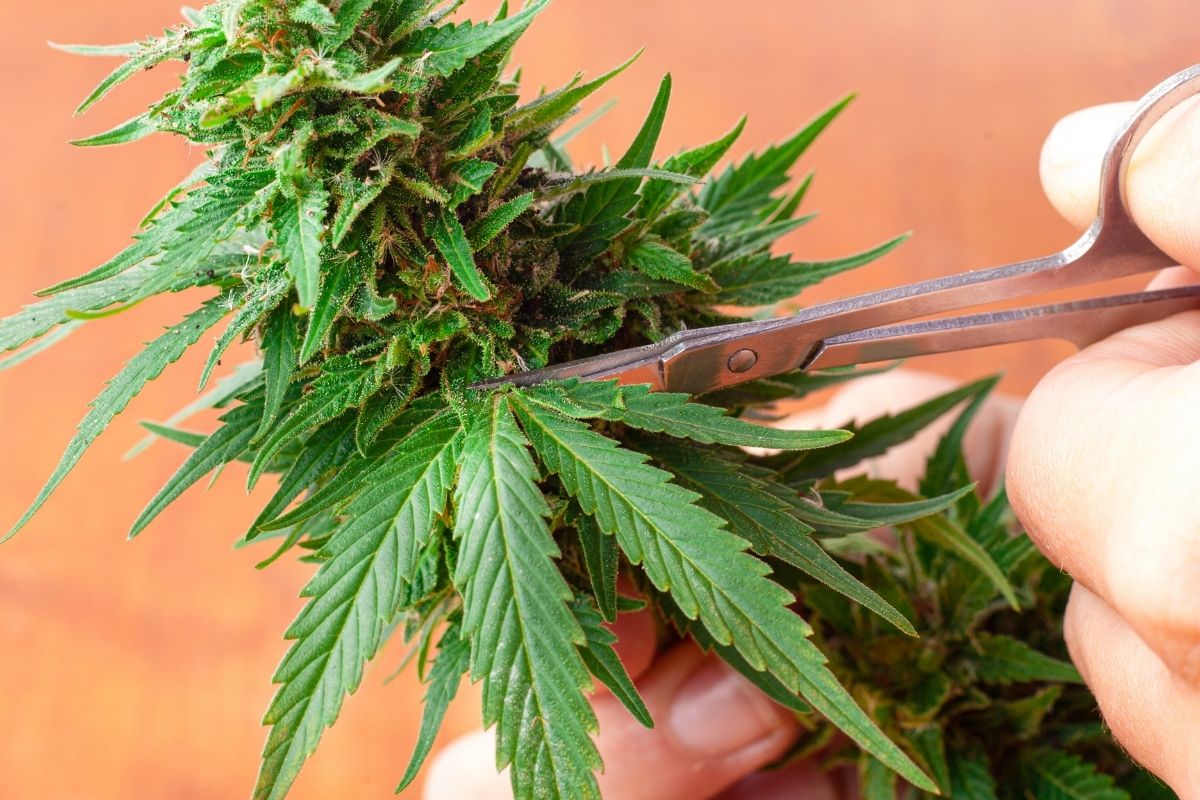 The debate within the growing community continues.

Topped plant vs non-topped plant, which is better?

To help you make the right decision, here, I breakdown everything you need to know about topping (or not topping) cannabis plants.

what exactly is ‘topping’ a plant?

Topping is the act of removing the apical meristem (the newest growth) from the top of a cannabis plant’s uppermost branches. Using a sharp blade, clippers, or pruning shears, a cut is made just above the node or within the internode. The lateral branches growing below the apical meristem now become the top of the plant.

The advantage of doing this?

And why do you want to produce more nodes?

When the plant reaches maturity, each node acts as reproductive tissue. This allows the plant to produce significantly more bud than it would if the plant was left to grow naturally.

I’d be remiss if I didn’t quickly mention lollipopping and fimming here.

Where topping removes an upper portion of the plant, lollipopping is when bottom branches are removed so the plant is top-heavy and directing all energy to upper-level branches. Both topping and lollipopping increase the number of buds that reach maturity, increasing your yield.

Fimming involves removing the top of a cannabis plant, but instead of making a cut within the first internode, the topmost leaves are cut. The cut takes three quarters (-ish) of the leaves away. Just like topping, this encourages the growth of multiple lateral shoots, which results in a denser canopy. Fimming can either be done with either your fingernails or by using a pair of shears.

why top a weed plant?

When the top of a cannabis plant is removed, it promotes the growth of additional buds and subsequent flowers.

A marijuana plant, if not topped, will grow into a Christmas tree shape, with a wide base, dense and leafy interior, and a thin top portion with a large cola or crown of flowers. Left to grow in this way, the central stem and its foliage shade the wider branches at the base of an untrimmed cannabis plant, resulting in bud production being concentrated to the outer edges of the plant.

When you top a cannabis plant, the tightly bunched lower branches will harbor humidity, forming a dense layer of warm air. Even with good airflow within a growing environment, this can create prime conditions for mold or mildew growth to infect leaves or flowers and expose the open wound created by topping to rot or bacterial infections.

For this reason, you’ll want to balance your topping routine with regular lollipopping — and examine the soil regularly to prevent disease before it spreads.

when to begin topping

When it comes to the right time to begin topping, there are two schools of thought.

Some indoor growers begin topping their weed plants early. When the plant is still a seedling; at least three nodes high, no less. While others wait for six or seven nodes (generally 3-4 weeks into a grow).

how many times to top

As for how many times to top a plant, it comes down to personal preference. Some growers say no more than 1-3 times. While others state as many times as you like.

Just avoid pruning when the plant begins showing signs of reproductive growth. Doing so will divert energy from bud production in branch and leaf production, resulting in a slower rate of bud growth.

what does topping do for a marijuana plant?

By clipping the top of your plant off, you are redirecting energy your plant would use that would be used to grow vertically to the branches that remain. Topping encourages your plant to grow horizontally and focus energy on strong lateral growth. In short (pun intended), this is what topping does for plants:

From the time a cannabis plant sprouts from its seed, the axis (main stem or trunk) races towards the nearest light source. A plant left to its own devices will grow as a leggy (tall and thin) seedling, and if not trimmed, will continue to stretch and develop wide node intervals, or large lengths of stem between each of its branches.

Leggy growth is normal for young plants, so topping is done to keep vertical growth under control and support the horizontal spread of their lower branches.

Without upper branches to feed, a topped plant will redirect resources to their lateral branches. This results in the increased production of axillary buds (lateral buds), each new bud either producing more vegetative shoots or reproductive shoots.

Although the walls of grow tents are very reflective, a cannabis plant will reach towards the most intense light source (up toward a grow light), so it’s a good idea to top plants regularly to maintain good light penetration.

Topping cannabis plants creates a wide, low-lying plant. This increases the amount of light that reaches the lateral branches growing further down the axis and creates an even surface area, allowing light from above to filter into the lower levels of branches.

Lateral branches will stretch out, and without shade from a central stem above, will collect more light energy. This results in robust growth and a larger yield.

With more light and less vertical competition, the plant redirects excess energy to grow the branches and leaves that remain. Strong branches are important for marijuana plants, as they will support heavy colas (inflorescence or flower) that result from optimal growing conditions and correct topping technique.

Putting this all together. Controlling the height and lateral growth of a cannabis plant increases light penetration, allowing the plant to redistribute nutrients and light energy into producing more axillary buds rather than vertical growth.

You guessed it, more flower.

Disclaimer: Each cannabis strain has a genetically predetermined amount of bud production. While some strains won’t reach their maximum yield without topping, other strains won’t produce more flower as a result of topping.

how much of the plant should be topped?

Some growers clip the very tip of the plant as a seedling, and others wait until the plant is well into its vegetative stage, removing several inches at a time. The amount of plant you remove should depend on the size of the plant and the shape you’re encouraging. Like with pruning, a good rule of thumb is only to remove up to a third of the plant at a time. This ensures the plant has enough remaining foliage to support its continued growth compared to its size and recovers from the stress of the cutting.

how to top a cannabis plant

what if a plant isn’t topped?

A cannabis plant that is topped will grow vertically faster than an untopped plant. Taller plants typically have more space between each node, and will push the height limits of a grow tent. Non topped plants will produce fewer flower buds and colas.

Topping is one method of encouraging a wide, stout marijuana plant, but this technique can be stressful. The low-stress option to grow your plant for width is to bend the center stem at a 90-degree angle by tying it to the side of its pot. This will expose the plant’s lower branches to more light and provide many of the same benefits that topping does, without actually removing any plant tissue.

Both training and topping techniques encourage your plant to produce more robust lateral branches where colas can grow. A plant that is trained with the low-stress technique will have a bushier central stem than one that gets topped, while topped weed plants will normally be shorter and slightly wider than those that are trained by tying.