What does scale look like on plants? Here is my collection of pictures. 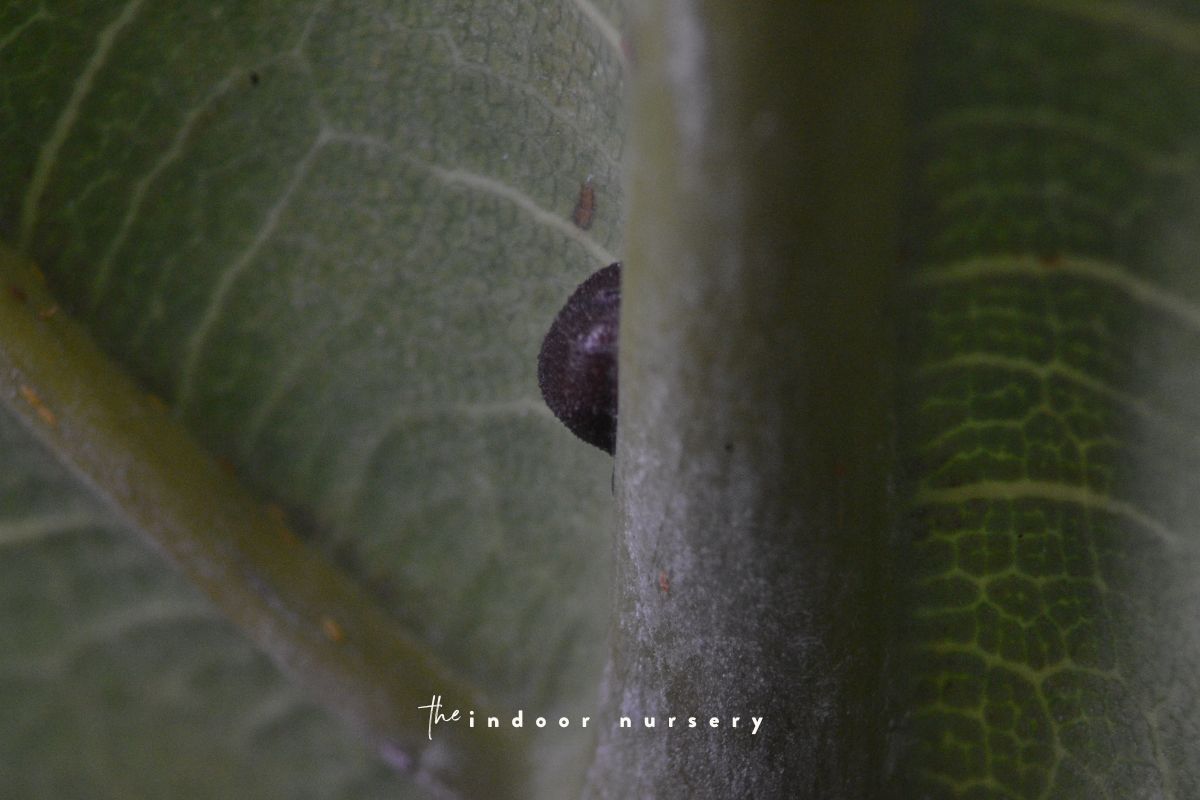 Which means that I’ve had plenty of time to learn how to identify and treat scale bugs… and take pictures of them too!

So welcome to a tour of my scale infested plants. My success rate for controlling scale bugs ranges from they-killed-my-entire-plant to I-saved-my-plant-from-scale-infestation.

I’ve already written at length about how to get rid of scale insects, so head over there if you’re eager to jump into treatment options.

Otherwise, I’ll go through what scale insects look like and my favorite way to kill scale insects (manually, it saves the plant).

Scale insects are small, sap-sucking bugs that live on plants. They come in a variety of shapes, sizes, and colors and they feed on the fluids of the plant they are attached to. The scale insect life cycle starts with eggs, which hatch into crawlers. During the crawler stage, the soft scale finds a place on the plant to attach themselves to and start feeding.

As they feed, they secrete a protective wax coating over their bodies that protects them while they mature, mate, and lay more eggs. This wax layer helps them to avoid being detected by predators and also prevents moisture loss. The wax can range in color from white to gray and is often visible on the leaves and stems of the plant. The waxy coating can also make it difficult to remove the scale insects from the plant manually.

Scale insects can be identified by the tiny shell like bumps on plant leaves and plant stems. These protective shells can range in color from brown to gray and may be found on the underside of leaves or at the joints of stems.

There are two types of scale insects that you’ll see: hard scale and soft scale.

The crawler stage is a little more difficult to notice. Scale crawlers can be identified on the underside of leaves and at the joints of stems. They are very small, usually less than 1/8 of an inch in length, and can range in color from white to yellow to brown. The crawlers will often be visible on the leaves or stems of the plant, and they can also be identified by their waxy coating.

These sucking insects are small and can be difficult to see, but their presence is often indicated by yellow or white spots on the leaves. This is why you need to check your plants regularly, as in every several weeks.

Removing scale will start to feel like a part time job 😉

What are some signs your plant has Scale?

Unfortunately, a scale infestation can cause a lot of damage to the plant, leading to an overall decrease in health and vitality. The plant suffers because the scale insects are draining it of its sap, which is essential for the plant’s health and growth. Sap is the nutrient-rich liquid that helps to deliver essential minerals and sugars from the roots to the leaves and stems of the plant. Without the sap, the plant is unable to produce food for itself and will eventually suffer from poor health.

Some signs that your plant has scale include yellowing or browning leaves, leaf drop, branch dieback, and a sticky substance called honeydew on the leaves or stems. This sticky substance is not plant juices! It is made of secretions from the scale insects as they feed on the sap of the plant. If the infestation is severe, the plant may become stunted or suffer from overall poor health.

How to treat plants for scale

There are a few ways to treat scale, including manual removal, pruning, and the use of insecticides. Manual removal is the most effective way to remove scale insects from plants. To begin, inspect the plant for scale insects and their wax layer. If you find any, use a pair of tweezers or a cotton swab to carefully remove them from the plant.

I like using a cotton swab dipped in rubbing alcohol. The adult scale insects are pretty easy to kill by hand… they sort of crack open. It’s gross. But the rubbing alcohol is for the little baby scale crawlers that are harder to see. I like to wipe all of the fleshy bits of the affected plant with the rubbing alcohol to be sure.

Scale appears most often around plant stems and the veins on plant leaves, where sap is flowing to promote new growth.

Pruning can help reduce the number of scale insects and their access to the plant, but it may stress the plant if it’s already weak from the infestation.

Finally, insecticides can be used to kill the scale insects and help protect the plant from further infestation. But be warned: they can be strong and do more damage to a weak plant that’s heavily infested than it’s worth.

A lot of people like neem oil, myself included. But I find neem oil too harsh for indoor plants with major scale damage. Same with any horticultural oil or insecticidal soap, really.

Instead, I recommend nursing the affected plant back to health before spraying anything on the plant.

The good news is: most houseplant pests have a similar treatment method. All jokes aside, the protective shell on scale bugs is what gives them away. The larval stage is a bit trickier, especially when those immature scale insects can crawl to any hidden fold of the whole plant. It’s not uncommon to spend an entire year removing scale insects from your indoor plants… especially as they can spread to other plants nearby. No matter 😀 a dedicated plant parent will welcome the care with eager and open arms!