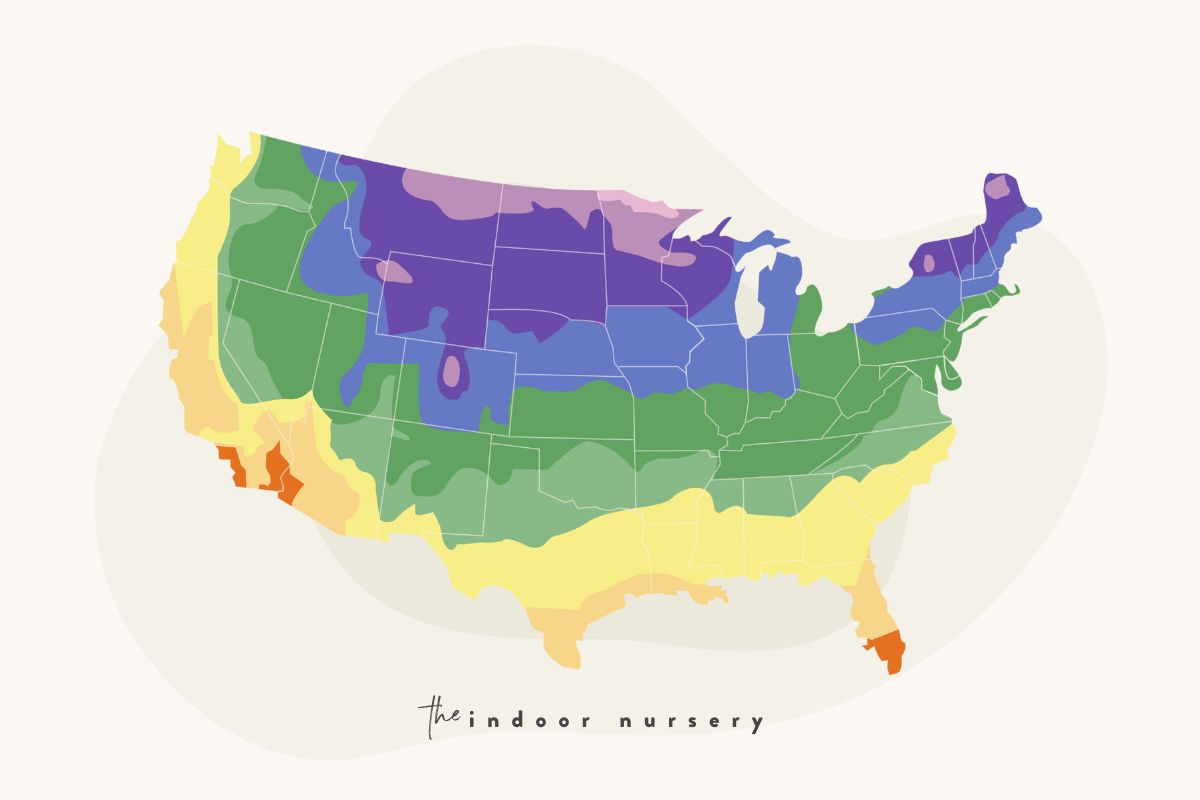 When you buy a new plant, it usually comes with some growing information like light and water requirements, as well as the plant’s hardiness zone. The hardiness zone is the average lowest temperature in an area, and it helps you know which plants are suited for your particular climate.

When it comes to indoor plants, this information is still very useful. It helps you know which plants need to be taken inside from your balcony or patio for fall and winter, and what kind of temperature conditions those plants need while indoors.

Hardiness zones don’t tell the whole story about a plant’s growing needs, but it provides important information that you can use to be sure your plants stay healthy in every season of the year.

Here, we’ll go over how you can use plant hardiness information to do your best gardening.

What is plant hardiness?

Plant hardiness refers to a plant’s ability to withstand cold to a certain degree. Defined by the United States Department of Agriculture, the plant hardiness zone map is an important tool for gardeners and farmers alike, providing a reference for choosing which plants can be grown in any given area throughout the year, if at all.

Knowing your location’s hardiness zone is a first step towards assessing your garden’s microclimate needs: while two locations may be in the same growing zone, local landscape features will make a difference in the conditions in and around your home. Whether you have an outdoor greenhouse, living room houseplants, or an indoor grow tent, you may have to adjust your interior environment for humidity levels, the lighting available throughout a day, or the temperature in contrast to ambient temperatures. Warm-season plants can be grown indoors part of the year and moved outdoors when the season is right, and knowing your hardiness zone will help you stay in tune with those seasonal changes.

PRO TIP: While the hardiness map is a good reference for your location’s planting conditions, it’s also important to keep an eye on the forecast when making decisions about moving indoor plants outdoors, as well as bringing them back indoors. Watch the weather report for the minimum expected temperatures and the first and last frost dates to be sure cold-sensitive plants don’t get damaged or killed by a cold snap. However, nature can be unpredictable, and that might happen even when the best of care is taken!

What are the planting zones?

The USDA hardiness zones, growing zones, gardening zones, or planting zones system is a categorization and mapping of the range of lowest temperatures across the US in winter of any year, labeled from 1 (the coldest, northernmost areas) to 13 (The southernmost and warmest parts of the country).

Many states reach across multiple zones, and the USDA zones themselves have variations within them. Each numbered growing zone is broken down into two halves of 5 degrees each, with

It’s important to keep in mind that each zone has many microclimates within it, with some being dry and others humid, and varying geographic features across localities.

The different planning zones are:

If a plant doesn’t have its USDA hardiness zone listed when you buy it, ask the gardener or nurseryman and they should be able to let you know which zone the plant is classified in, the zone of your location, and how those interact. Hardiness is about temperature, so some plants may be in the same growing zone but need different environmental conditions to thrive.

Aside from some kinds of trees, almost any plant can be grown indoors if you manage the internal climate for its preferences. Here, we’ll go over some examples of common plants you may find indoors, including tropical, vining, and flowering houseplants, as well as fruits, vegetables, and herbs, and see how their hardiness zone contributes to the overall picture of a plant’s preferred growing environment.

Most houseplants are from tropical areas where temperatures are warm year-round, and the plants are evergreen.

Many vining house plants come from tropical climates, but one cooler-weather evergreen is included in this list:

Most perennial flowering houseplants that we keep indoors are from tropical areas, including:

Some fruits and vegetables are annuals and need to be replanted each year, while others are perennial and will grow year-round. Foods from any group can be grown indoors if you keep the right temperature, and your location will determine when certain plants can grow outside within a year, and when you may need to start seeds inside to later move to the outdoor garden. Most can be grown anywhere temperatures are right for the period of time that they need to mature.

Herbs are another popular plant to grow indoors, and they come from across the hardiness zone spectrum:

Hardiness zones across the pond

While the USDA plant hardiness zone system is a popular system across the world, some countries have adapted it to conditions relative to their situation, or created a new map altogether. In the English-speaking countries and Europe, both the USDA rating system and local rating systems may be used.

Here are some tips to keep in mind when considering your plant’s hardiness zone and care information: