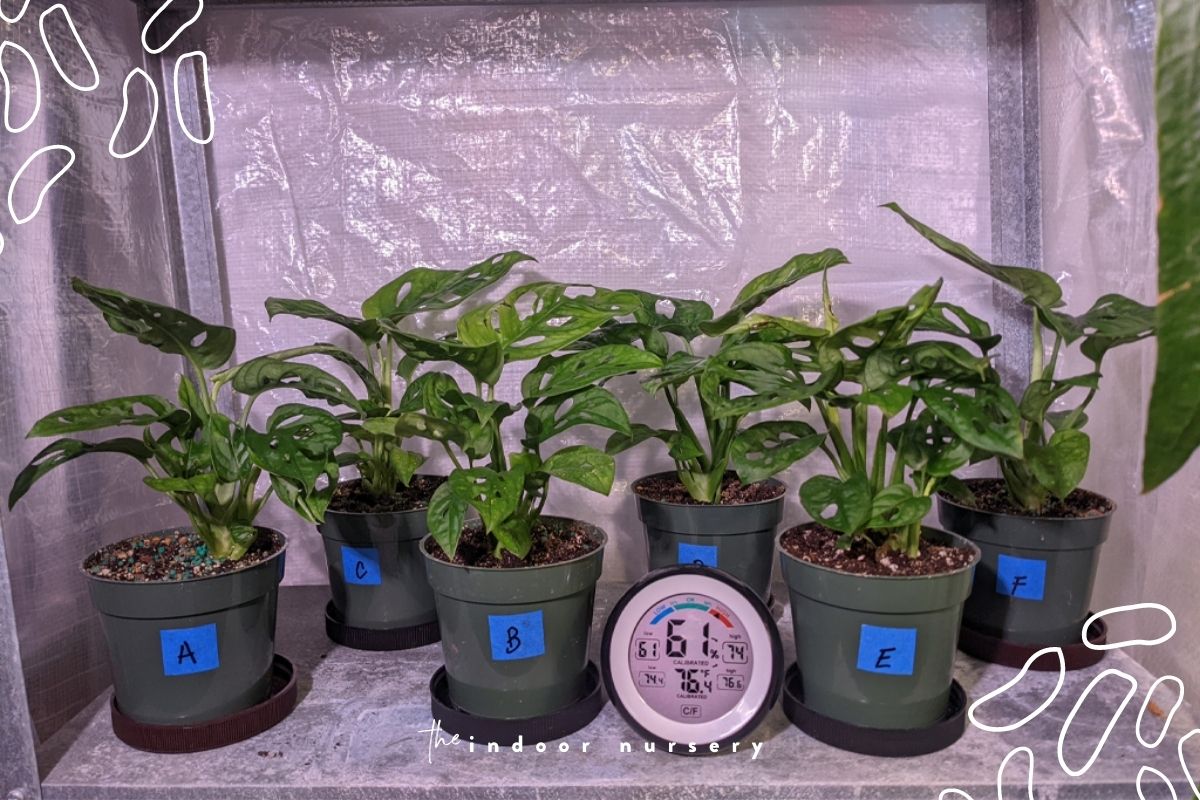 There are so many fertilizers and plant food out in the market and it can be confusing which one to use.

There is always the danger that your beloved house plants will not like the fertilizer and may even experience fertilizer burn!

The frequency to fertilize is also a big debate—some manufacturers say that you can fertilize whenever you water while hobbyists say that it’s best to water only when the plant is actively growing.

So, we decided to eliminate the guessing game for growing plants and see the effect of a couple of fertilizers that are available on Amazon. Our indoor plant fertilizer experiment surprised us!

For four months one part of our apartment looked like a science fair project with one section just for six potted swiss cheese plants and grow lights. And each week, we made the nutrient liquid and measured the pH of the mixture before soaking the plants. It was a lot of work, to say the least!

But we’re glad we did it because though we followed manufacturer recommendations, we ended up with fertilizer burn. So we spent another few months recovering the plants, which we documented below as well.

Here’s what we learned.

plants used in the experiment

Five Swiss Cheese plants to be fertilized and one as a control—six plants in total.

Learn more about how much to fertilize your plants.

These are the liquid fertilizers that we used for the experiment:

Liqui-dirt is described as an “all natural fully digested elemental, nutrient supplement system for all plants. All vitamins and minerals with the microbial index are essential to a plant’s life. Complete Micro-fungi mycorrhizae and rhizobacteria strains, in a pH Balanced formula.”

Easy Peasy is a “liquid fertilizer for indoor plants containing a specific ratio of nitrogen, phosphate, potash, and a bit of sulfur to help your plants remain healthy and beautiful.”

Purived is a “super concentrated all-purpose liquid plant food. Purived has an N-P-K ratio of N4-P5-K5. Nitrogen (N) promotes healthy green leaf growth by stimulating the production of chlorophyll, which plants use to convert sunlight to food during the photosynthesis process. Phosphorus (P) supports the development of plant roots (that anchor and strengthen plants), stems, blossoms, and fruits. Potassium (K) helps plants stay healthy and vigorous, and aids overall functions of the plant.”

Superthrive is “a highly concentrated non-toxic vitamin solution invigorating all varieties of greenery for home gardeners and professionals alike. It maximizes potential by quickly building a strong root base and reducing transplant shock. It also restores plant vigor.”

We decided that the best way to determine the results would be to take the plant out of the pot, wash all the soil from the roots, and measure the plant before and after the experiment. That way, we could get an accurate measure of the amount of biomass the plant had before the experiment started and how much it packed on at the end of the experiment.

The humidity was kept at “high.” When it went down the plants were misted with water or a humidifier was used.

A fan was used for air circulation to avoid mold growth.

We measured the growth of the plant and checked the leaves to see if they grew in healthy.

One month into the experiment the plants have green leaves and new growth, most had two new leaves.

Overall, the plants continued to grow. The new leaves were crinkled and pointing down. Some older leaves starting to show signs of chlorosis, with yellow leaves with dark green veins.

All the fertilized plants grew in weight, the plant root mass grew and the roots were healthy.

Since the plants were experiencing fertilizer burn and chlorosis, we decided to see how long it would take for them to recover. The vines of Plants B, C, D, E, F, were trimmed and fertilizing was stopped. For the next month or so it was just watered with plain water.

The plants continued to show signs of overfertilization and dropped lower leaves.

After two months, the plants grew slowly and continued to lose lower leaves. But the new leaves grew outward (instead of downward) and were not crinkled.

Plant A had big green leaves but the vine didn’t grow that fast. It also ended up losing a lot of leaves in the end. A bunch of leaves had fertilizer burn and chlorosis.

Plant B grew but not as much or fast as Plant C. It also lost fewer leaves than Plant C. Easy Peasy liquid plant food seemed to be gentle and the plant grew but not crazy fast or big. After two months the new leaves look healthy.

Plant C grew well and the leaves were big, but were pointing downward and crinkled. So for big leaves and fast growth Purived liquid fertilizer for indoor plants would be good to use but do not use it every watering to avoid overfertilization.

Plant D was leggy and the leaves grew in small and crinkled. Even though The Grow Co Organic indoor plant food has a low N-P-K ratio it still shouldn’t be used every watering. After two months the new leaves look healthy.

Plant E was leggy and the leaves grew in crinkled. Superthrive only has nitrogen and even in the small amount, it didn’t work well to be used every watering. The manufacturer also recommends using it in addition to other fertilizers and not just on its own.

After a trim and no fertilizer, two months later the new leaves look healthy. Some of the old leaves are still experiencing fertilizer burn.

Plant F grew, but not as fast as the fertilized plants. It also lost its lower leaves.

It is important to keep in mind the N-P-K ratio of the plant fertilizers. Each plant nutrient—nitrogen (N), phosphorus (P) and potassium (K)—has its own function to keep plants healthy.

Although the plants did grow with multiple leaves coming in and notable root growth, the leaves were not healthy. A lot of the older leaves died and the leaves crinkled and turned downward. The plants did not look happy!

We learned a lot from this indoor plant fertilizer experiment and it is good to know that it is not a good idea to use liquid fertilizers every time you water. Once a month is best to avoid over-fertilization. Also, please keep in mind that this is for potted indoor plants in soil only.

Hopefully, this post will help you decide which fertilizer to use!